branch of Al-Abdali-Boulevard hosted a discussion session held by the Association of Women on Boards Jordan entitled “The Reality of Women’s Participation in Boards of Directors and Decision-Making Positions.

”The session aimed to underscore the reality and requirements of women’s presence on boards and identified challenges that prevent or limit women’s access to boards and leading positions whether in the public or the private sector.

In her opening speech, Ms.Eman Al-Damen, President of the Association, and a member of the Board of Directors of the Commercial Bank of Jordan talked about the pioneering and new role that the Association will undertake to achieve its vision and goals.  She stressed the need to adopt instrumental mechanisms through legislation, policies, and especially good governance to secure better engagement of women.  Justice, transparency, disclosure, and acceptance of diversity, she added, are key principles that companies, institutions and bodies should adopt to promote a culture that welcomes gender diversity.  The Association of Women on Board, Ms. Al-Damen stressed, would adhere to strategies and dynamics that help in the attainment of the above to increase the number of women in decision-making positions. 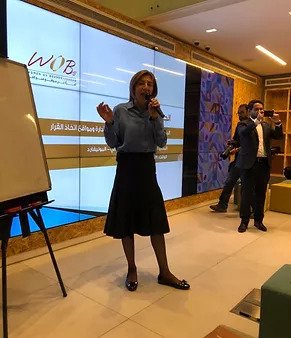 Then, Dr.Hanan Ibrahim, a founding member of the Association and an associate professor at Al-Ahliyya Amman University, presented the recommendations adopted by WOB’s first conference entitled “Why and How, ” held in January 2019.​

The panel discussion was moderated by Ms.Ibtisam Al-Ayoubi, Vice-President of the Association, and a member of the Board

of Directors of the National Bank.  She featured some of the most important difficulties that impede women's access to key positions, including deep gender gap, lack of women’s presence in leadership positions and poor representation of women in the labor market. She, along with participants from the audience, drew attention to the importance of women as key partners in supporting the implementation of good governance in public and private companies, whether through their presence in the board of directors or through assuming other leadership positions.  Ms.Al-Ayoubi asked the attendants who were mainly women in leading positions to point out those challenges that hinder women’s access to decision-making positions. 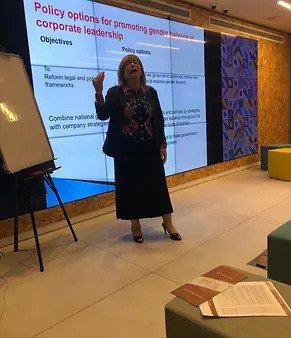 Based on their diverse experiences, the attendants explored mechanisms that should be adopted to increase women’s representation on boards and other leading positions.​​

This session was attended by a group of women who have notable experiences and advanced level of education, enlightened, already in leadership positions and who are passionate about helping other competent women to reach key positions.

This enriched the discussion, facilitated the formation of recommendations and proposals and also the identification of a roadmap for WOB’s future work.​​

At the end, the National Bank was thanked by all participants, pointing to its prominent role in embracing most of the initiatives related to the development of women and in making necessary efforts to apply the principles of governance in a way that supports women’s involvement in key positions and endorses principles of justice. 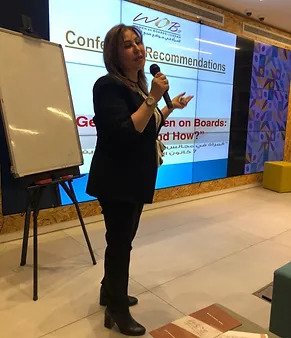 Finally, we would like to point out that the Women on Boards Jordan is a non-profit association founded in 2018 and aims to increase the number of Jordanian women on the boards of companies and in leadership positions in both the private and public sectors.  It also seeks to motivate Jordanian professional women to pursue higher positions and equip them with the knowledge, skills and approaches to achieve this in an advanced stage of their profession.

Newer Women On Boards Jordan
Back to list
close
Start typing to see posts you are looking for.
Shop
Sidebar